Are you tired? I bet you’re tired, aren’t you. You know why? Because you didn’t sleep enough last night. You know what? Neither did I. But I’m not here bitching about it, unlike some people. Nope, I stayed up late working on this very review, just so you’d have something to read while you’re not sleeping. How am I talking about it in the past tense when I’m clearly at the beginning of writing it right now? Go fuck yourself, that’s how. I’m fucking tired.

Sleep is how the human body recharges itself after a long, hard day, preparing us for another new day of work, school, or furious masturbation. Or, all of the above for a few of our more intrepid readers who are otherwise unconcerned with things like “continued employment” and “not being in prison”. It’s how we prepare for the next day. Or at least that’s what they tell me. What it really sounds like to me is a ripoff. Spend eight hours a night laying down with your eyes closed in an unconscious state? Eight hours is an entire third of a day. What a massive waste of time. I’m a busy man. I have important things to do, like eating and looking at pictures of cats with captions and touching myself inappropriately (Unrelated to the other two tasks. Usually); I just plain don’t have eight hours to waste with my eyes closed.

Some people have been so brainwashed by The Man and are so hellbent on getting “enough sleep” that they even take special drugs that force their bodies to fall sleep and stay that way all night. Not letting yourself sleep after taking such a pill often results in ridiculous hallucinations that rival your average drug trip. That’s complete bullshit. I can achieve that without any pills or sleeping. I mean, I just stay up for three days, and it’s like my body starts producing its own free, natural LSD. All you people are getting ripped off. I know, that donkey agrees with me.

Science has proven time and again that well-rested brains function with a much greater effectiveness than tired ones, acting more intelligently and retaining more knowledge. But as we all know, most science is a myth created by the American auto industry to convince us to buy more tires. Pounds per square inch? Hah, you’re not fooling anyone with your made up “measurements”. Next you’ll be trying to tell me that I shouldn’t fill my gas tank with whatever liquids I can find, and only gasoline should ever be put in there. “Then why is it called a gas tank?” you’ll say. “You’re a sweaty pirate hooker who is also adopted after being abandoned by parents who didn’t want you,” I’ll say. Checkmate. I mean, if humans really needed sleep, then why do we have Reddit? Think about that one, Hans. That’s like handing a dog a chew toy and expecting him to go to sleep instead of humping it for hours upon hours. Spending hours reading the same story about a Jolly Rancher over and over is a much better use of my time than sleeping ever could be.

I bet you don’t even remember the last time you didn’t bother sleeping, do you? Sheeple need to wake up and smell the boiling rhubarb. By letting ourselves sleep every night, we’re just allowing our fate to be handed over to the lizards in charge of this kingdom. While you read the back of your eyelids and dream about sausage-making, Mitt Romney and his sons are wide awake, digging through your garbage to find old shirts that don’t fit anymore. And you’re just letting it happen, thinking that the dumpster is safe and secure, awaiting the milkman’s morning delivery of koala shits. Someday soon, however, you’re going to wake up and find that he left you absolutely nothing, because your shirt supply is empty, all the while Tagg Romney now has six inch thick cotton armor, and he’ll be the one Sumo wrestling your dad instead of you. 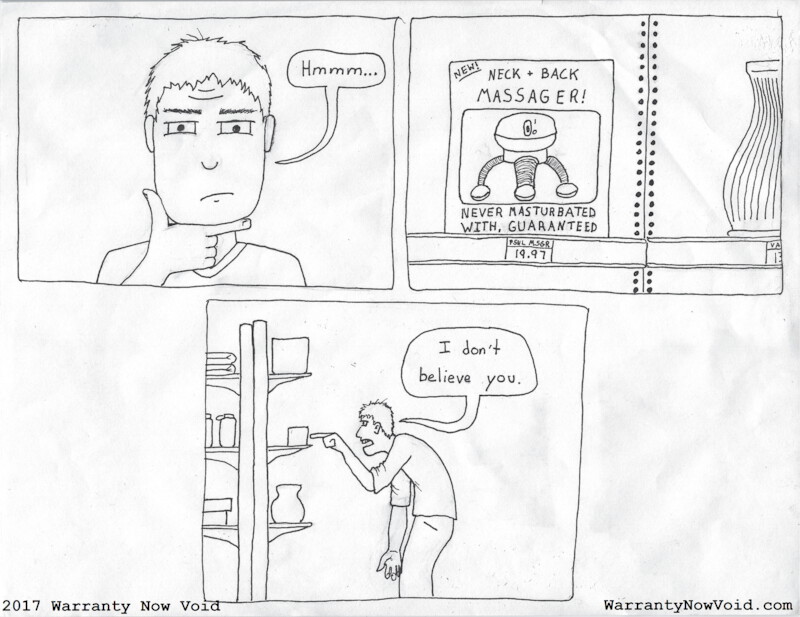 The open box discount is sometimes not really worth it in the end. 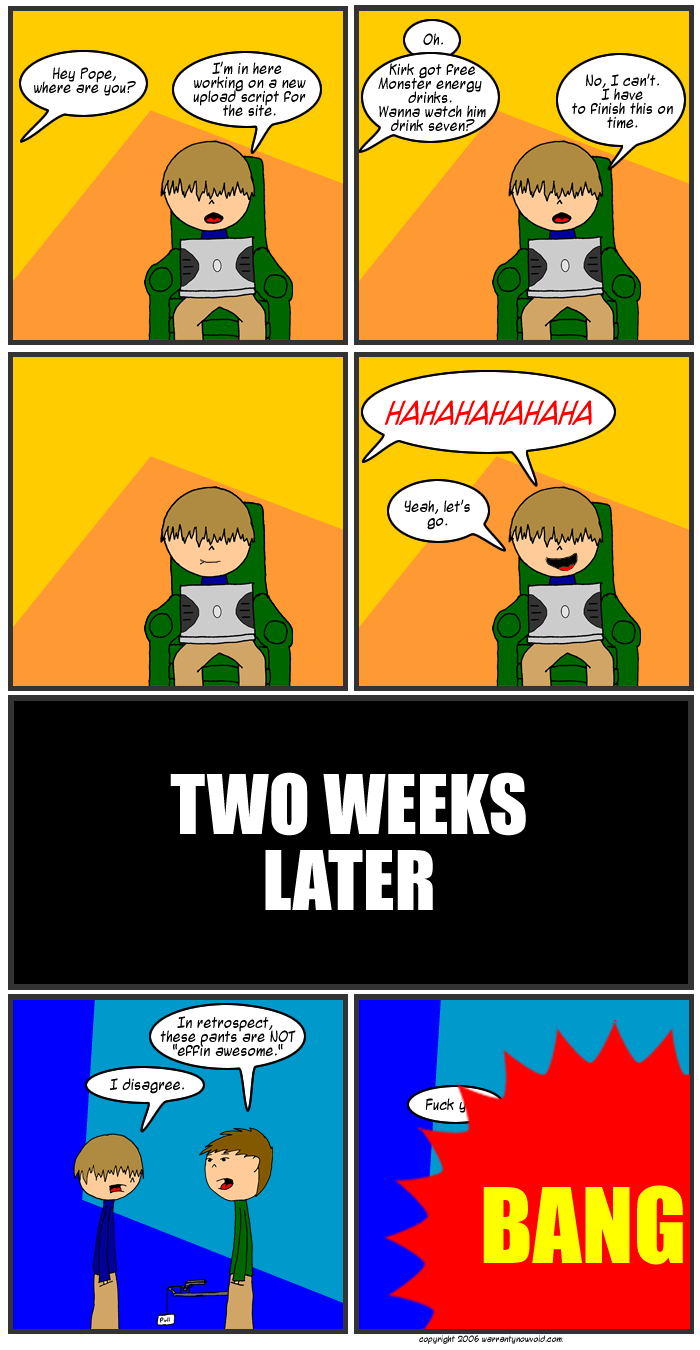 A follow-up to the previous comic, this took about six and a half months to produce, and we had no idea what we were doing the entire time. Is it funny? hard to say. Maybe stay up for a good solid semester or two and then come back and let us know. 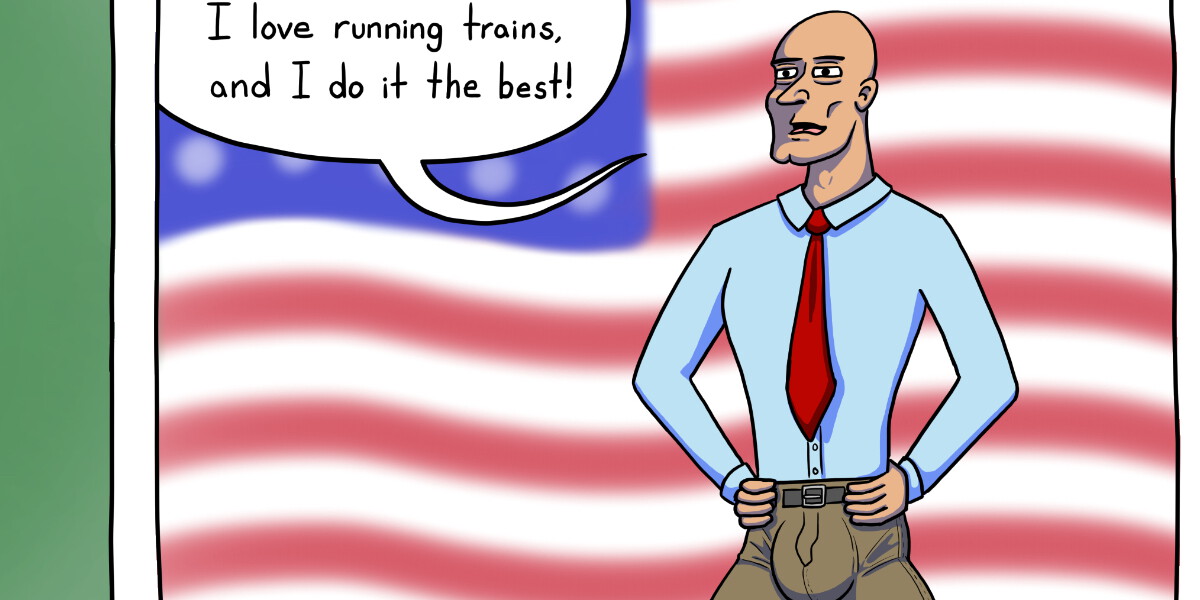 The Makers and The Takers

We think everyone can learn something from this classic tale of- some men who uh- um- Hey, is it really sweaty in here or is that just me? Can someone turn down the corporate tax rate a bit?

Fatherhood is a unique life experience in which you attempt to pass along all the hard-earned knowledge of your life to your children, but also like, really fuck with them at the same time.